The Church – “Untitled #23”
The Church would be considered a one-hit-wonder to those who care about such things. However, next year will be their 30th and unlike almost all of their peers, they are still making fantastic music together. They had started off as sort of jangly-pop, but these days it’s mostly improvised musical trips with lyrics of death, post-death, transmigration, dream-states, surrealist blues, pseudo-mythology & space travel, with the odd love song thrown in. Not everyone’s cup of tea, but certainly mine so drink up! Here’s a clip from a 2009 performance at the Triple Door, recorded specifically for KEXP; here’s ‘Deadman’s Hand’

And Also The Trees – “When The Rains Come”
And Also The Trees is one of those bands that most people have never heard of, but in my circle of friends, they are at the top of the list of all-time-faves! This year, they released an album of acoustic version of all of their ‘hits’, and I use that term very loosely with this band. Another band that’s not for everybody, but if you love Edgar Allan Poe and wondered why someone has never created music to match, then AATT is just the band for you! Here’s a performance of one of my favorite songs from 1996; ‘Dialogue’

Animal Collective – “Merriweather Post Pavilion”
I suspect that this album will top most critics list for album of the year. In fact, it’s one of the albums of the decade! However, it is only my 2nd fave of this year (see below). It is fantastic that’s for sure, especially if you like creepy-chaotic-pop mixed with the sweetest harmonies, a la The Beach Boys! Here’s Geologist, Avey Tare & Panda Bear with ‘Brother Sport’

The Antlers – “Hospice”
A friend turned me on to The Antlers this year, and whilst not an immediate favorite, it has grown and lasted in my iTunes library for a good chunk of the year. It’s a sleepy kind of record and lyrically it’s very heavy, but it’s pure sonic bliss. Check out this fan video from YouTube of ‘Kettering’, as one viewer posted, “no better way to spend 5 minutes of lifetime”…

Bat For Lashes – “Two Suns”
A few years back I found myself lamenting the semi-retirement of Kate Bush and wondering why no one had stepped up to take her place. Enter Natasha Khan and her glorious project Bat For Lashes! That’s not to say it’s a carbon copy of Kate, but it does hail from the same lineage of art & music & imagination. Bat For Lashes’ 2nd album “Two Suns” was released Two Times this year, and deservedly so. It’s fantastic and I can’t wait for album #3. Here’s ‘Pearl’s Dream’ and ‘Moon & Moon’ from this year’s KCRW in-studio performance.

Blur – “All The People (Live in Hyde Park July 3rd 2009)”
This year I had 2 dreams come true! One was to finally get to England, and the other was to see Blur playing together again, and it all happened in the same week! On July 3rd, 2009 Blur played London’s Hyde Park to an estimated 100,000 people (70,000 tickets were sold, an estimated 25,000 stood outside the walls listening & we saw an incredible amount of people scale the 20 ft walls, impressively). 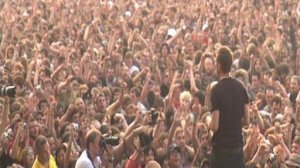 Did I mention that I hate crowds? However, this crowd was full of love and collective joy for this reunion show! Here’s ‘Girls & Boys’ captured by camera phone!

Doves – “Kingdom Of Rust”
This is another album that grew on me over the year. The Mancunian band has
been hit and miss for me over the years. Their debut was fantastic, yet the follow-ups have been less than stellar. They’ve remedied this with this year’s “Kingdom of Rust”, which is chock full o’ brilliant tunes. Here’s ‘Winter Hill’ from Later…with Jools Holland.

Eels – “Hombre Lobo”
Is E today’s least appreciated musical genius? Yeah, probably but maybe it has to do with the sorrow and/or anger in his music. However it is almost always done with a sense of humor, so what gives? Well, for those of us in-the-know, Eels’ records are a highlight of any year, and in fact, they’ll have another out before year’s end! I should point out that the sense of humor is not in this next track; here’s ‘The Longing’ live in-studio at KCRW…

Harold Budd & Clive Wright – “Candylion”
When I was 18 years old, someone gave me a Harold Budd album. I’ve been hooked ever since. He has done much collaboration over the years, perhaps most notably with Brian Eno, but his most recent collaborations have been with Clive Wright and they’ve produced some of the most beautiful music I’ve ever heard. This years “Candylion” record ranks right up there with The White Arcades, Lovely Thunder, The Moon And The Melodies & my fave, The Pearl. Sometimes fan-videos are they only videos for an artist. Luckily, they can inspire some of the most creative pieces. Here’s one for ‘Eaux d’Artifice’

Iggy Pop – “Preliminaires”
Perhaps the most surprising record this year is Iggy Pop’s “Preliminaires”! It is not because it’s great, which it is, but because it’s unlike anything I’ve heard from Iggy, ever! I have heard it described as ‘ambient classical french jazz’, but perhaps an easier reference point would be the great Serge Gainsbourg, if Serge was a half-naked punk from Detroit. Here’s Iggy live from France with ‘King Of The Dogs’

Julian Casablancas – “Phrazes For The Young”
Tired of waiting around for the new Strokes album? After all, ‘Is This It’ was declared the best album of the decade by the NME. Well, you don’t have to wait to hear Julian’s lovely voice anymore, as his solo album has finally hit and it’s beautiful, symphonic, electronic & fantastic! Until recently, I’d never seen a trailer for an album…

Unfortunately, there are no official videos from the record yet, but you can listen to one of my favorite tracks here, titled ‘Glass’

Julian Plenti – “Julian Plenti Is Skyscraper”
Paul Banks, lead singer for New York’s Interpol also released a solo album this year. Oh, and he’s now calling himself Julian Plenti. It’s surprising in it’s versatility and like the Julian Casablancas record is a nice gift while we wait for them to go back to their day jobs! Here’s the video for ‘Games For Days’ and see if you can guess who the girl in the video is…

Phoenix – “Wolfgang Amadeus Phoenix”
If you’ve managed to not hear a Phoenix song this year, then you were obviously on a different planet for most of it. It would actually have to be pretty far out there as I’m pretty sure Mars & Venus are receiving the transmissions and I’ve heard rumors about how when certain gasses are mixed Jupiter can also enjoy them. Here’s ‘Girlfriend’ from The Late Late Show with Craig Ferguson…

Robin Guthrie – “Carousel”
When The Cocteau Twins broke up in 1997, it left a dream-pop musical void that would not be filled until 2003 when one-third of that band began releasing new material. I’m speaking of Robin Guthrie of course, and he has been extremely prolific ever since, releasing EP after EP, as well as many albums. 2009’s “Carousel” is a must for Cocteau Twins fans, and remarkably you don’t really miss the vocals all that much! If you do, just make up some nonsense words and syllables and sing along; here’s ‘Sparkle’

Steve Kilbey & Martin Kennedy – “Unseen Music Unheard Words”
This may qualify as the saddest album of the year, but it’s also one of the most beautiful. Born of a collaboration between Steve Kilbey, best known as the lead singer for The Church, and Martin Kennedy from All India Radio. Please enjoy this lovely piece entitled ‘Maybe Soon’

Bob Dylan – “Christmas In The Heart”
Wow, this is a really great record! If you hate Bob Dylan, then you will hate this album. If you are a Dylan fan without a sense of humor, you also will hate this album. If you do not fall into either of those categories, then I think you could do worse than to run out and grab this CD or better yet, vinyl before the holidays are over. It’s fun, reckless, reverent & in parts throwaway, which pretty much sums up the season, does it not? I’ve already blogged about this record and how its royalties go to the charity FEEDING AMERICA, so I’ll stop now and let you enjoy this fantastic video for ‘Must Be Santa’

U2 – “No Line On The Horizon”
For me, U2 is one of the greatest bands of all time. It’s tough to find another band that has been as popular and prolific as well as creatively relevant over 30 years, from any time or genre. That being said, I was not a big fan of the previous 2 albums, “All That You Can’t Leave Behind” & “How To Dismantle An Atomic Bomb”. While they both have some fantastic songs, they also contain the first songs U2 has ever released that I absolutely loathed. They shall remain nameless of course. I felt that U2 were going down the MOR path that Sting had unfortunately laid for them, catering to the masses for the sake of album sales. My connection with the group however dates back to my childhood and naturally my hometown, so they will always get the chance to win me back. When I received the new album, I approached it very cautiously, even though I was excited about the fact that for the first time in their 25 year partnership, Eno & Lanois were writing WITH the band and not just producing. So I put the CD in my car for the drive home; first song comes on and I think, “ok, this is sounding pretty new and cool”; second song comes on and I think, “this one’s a little formulaic, but it’s good”; still cautious, the third song comes on and I think, “wow, this is different, in a really good way”; then the fourth song comes on and by the end of the first chorus I’m openly weeping! It was like my childhood pet walked back through the front door. Totally unexpected & totally fantastic, I’d rank it up there behind The Joshua Tree & Achtung, Baby! as some of their best work, and hands-down the best album of the year! Here’s song #4, ‘Unknown Caller’