In 1983 my friends and I set out on our little Rolling Stones adventure. Their concert film ‘Let’s Spend The Night Together‘ had just come out, and we were determined to get to the Cinedome to see it. Easier said than done, since we were 11 and our parents wouldn’t let us. So we devised a plan, that involved lying to them, getting out of school early (somehow) and hiking the 10 miles to the theater. The latter would prove our undoing, as it gave the ‘rents time to track us down. I spent the next 2 weeks restricted to my house! In defiance, i refused to remove my Rolling Stones t-shirt that i bought from the local stoner at the arcade. 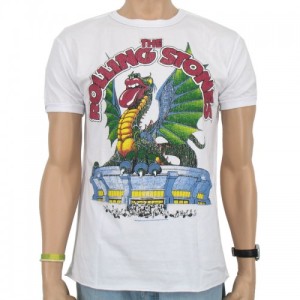 I never did see that film so, I had to settle for clips on MTV…

You may have noticed these last couple of weeks, The Rolling Stones have been all over the place promoting the re-release of their classic “Exile On Main Street” album, which came out more than a decade before my little mis-adventure. I’m reminded of how much talk there was about the age of the band way back in 1983 and whether or not they should call it a day. Seems absurd now-a-days, seeing the likes of Keith couch surfing the various television talk shows.

As for the reissue, well, it’s really only notable for the new songs, which from what i understand were started back in ’71 or ’72, and finished last year. Some haters will poo-poo this, but i actually think it’s a great idea. I mean, they could have stayed unfinished and unheard, but watch this next clip and listen to music that’s still greater than what American Idol is serving up!

However, if you already have ‘Exile’, which if you love the Stones like me, you probably do, i would recommend hitting up Target. I know it’s not exactly the hippest of music stores, nor is it your local indie, but sometimes cheap is cheap, and Target offers JUST THE BONUS DISC for $10! These tracks are easily worth that, and you do not have to settle for low-quality mp3’s from iTunes… You’re welcome!

As for the age of The Rolling Stones, peeps should remember that while our idols are young, skinny, heroin-chic rock stars, their idols were Chuck Berry, Muddy Waters and countless Chicago Bluesmen, all playing until they cannot play no more! So why should Mick, Keith & the boys stop? Just keep on keepin’ on…