Making An Impact At SXSW

With SXSW happening but once a year, flocks of musicians and bands make their trek to Austin, Texas for the one-off chance of making an impact on the thousands in attendance.  Once such act; La Vida Boheme who hails from Caracas, Venezuela made that impact at this year’s SXSW music festival two weeks ago. 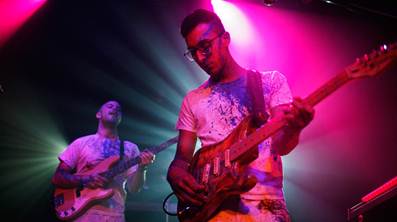 Being dubbed as the next big thing in the Rock En Espanol movement with influences ranging from 80’s punk to Electronic Dance music, La Vida Boheme tore through their set at The Parish dressed all in white with blue and green paint splattered all over them.  Their latest release “Nuestra” on Nacional Records, received two Latin Grammy nominations for best rock album as well as one for best rock song for “Radio Capital”. Led by singer Henry D’Anthenay, these guys are making people take notice not only for their eclectic shows but also as a staying powerhouse in Latin music.  NPR Music put out their “Possibly Life-Changing Music Discoveries from SXSW 2012” and La Vida Boheme made that list with flying colors, no pun intended.