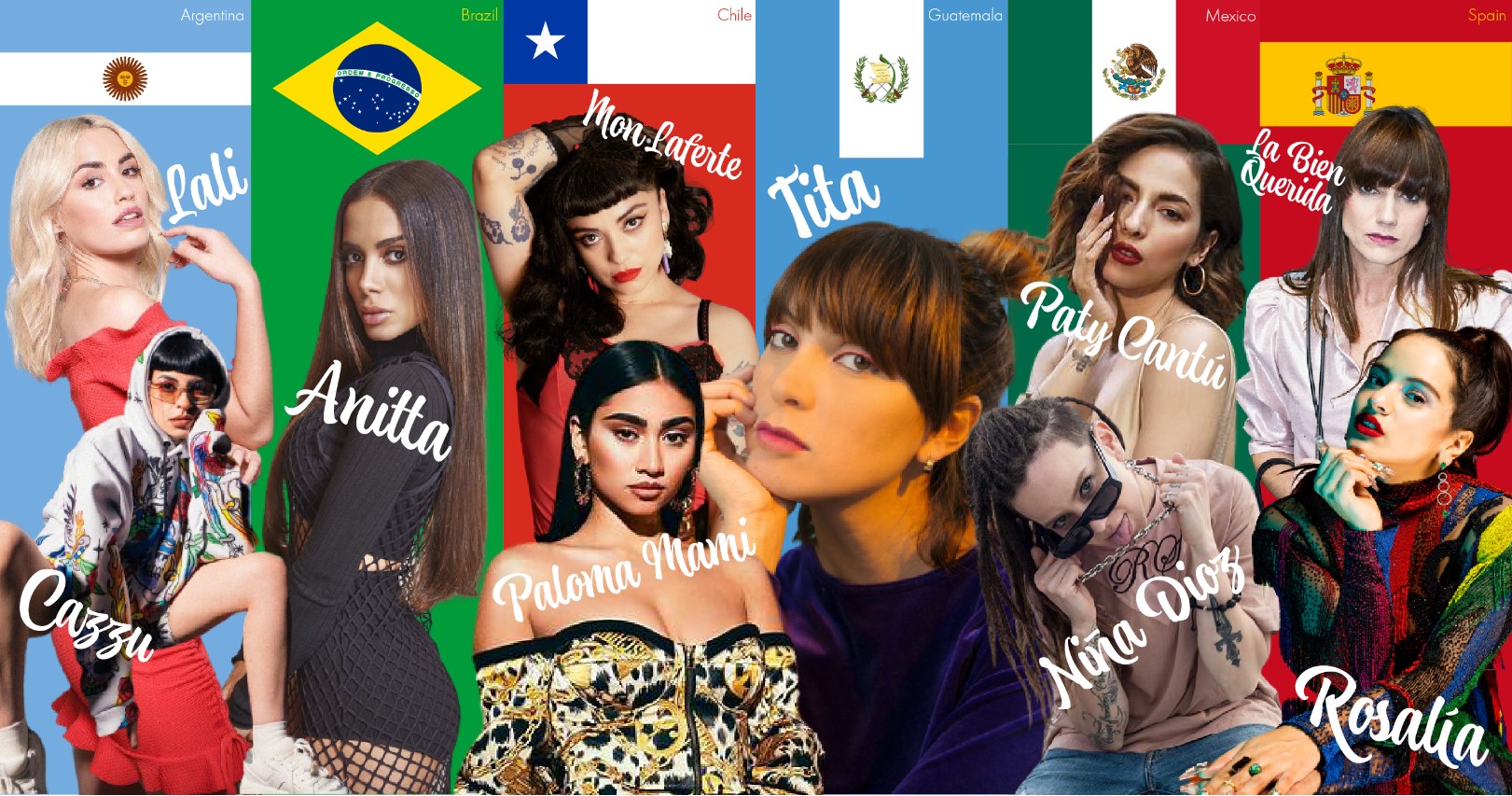 Ever since Ricky Martin took the world by storm with his performance at the 1999 Grammy Awards, the world of Latin music has had a global impact. In the years to follow with the rise of streaming services, music from all corners of the Spanish speaking world is reaching fans everywhere. And lately, with Reggeaton and Urbano ruling as subgenres in the Latin charts, it felt like there were not enough Latinas representing. In fact, the last few years only had a handful of women made the top 10 on the charts.

Thankfully, we live in a world now where women are taking the forefront in everything from being Vice President of the United States to Prime Minister of New Zealand, and the world of Latin music is rife with female artist who are killing the game in multiple genres screaming, “It’s not a man’s world anymore.”

Below is just a small sample of notable woman making noise around the globe.

Performing pretty much her whole life, Lali Esposito who goes by Lali set the stage on fire after her Times Square performance for Univision’s Year End countdown and shows at Rock in Rio in Brazil.

“La Jujeña” — as Cazzu is called by her colleagues due to the fact she was born in the Northern Argentinean province San Salvador de Jujuy, which is also known as the Argentine of Trap.

BRAZIL
Making trilingual music (Portuguese, Spanish and English), Anitta is setting the world on fuego! Shuffling genres like Neymar shuffles fútbols. Teaming up with Cardi B will make the natives restless.

CHILE
Setting the scene with her independently release Spanglish single “Not Steady,” the New York-born Chilean sensation, Paloma Mami, has garnered respect around the music scene. She has accomplished hit after hit within 2 years and at only 21 years young, she already has over 1 billion streams.

Norma Monserrat Bustamante Laferte, known by her stage name Mon Laferte has the most digital sales to date of any Chilean singer and shows no signs of stopping. Besides being an acclaimed painter, she’s also an activist for women’s rights and has won 3 Latin Grammy Awards with a win for last year’s single “Biutiful.”

GUATEMALA
Mariana Moreno, better known as Tita is an uprising artist who is just getting her feet wet in the Latin Indie Music Scene. She is well known throughout Guatemala for her VJ stints in the country. Incorporating fresh and modern sounds, Tita’s music is eclectic mixing Indie, Electronic, Hip Hop and Pop. She counts the Beatles, Mac DeMarco, and Natalia Lafourcade as influences.

MEXICO
Working the underground Hip Hop scene of Monterey, Mexico for many years, Nina Dioz was thrust into the scene with performances at SXSW as well as New York’s Latin Alternative Music Conference. She continues to hone her craft in the underrated Hip Hop scene of Mexico and has been showcased in articles for DJ Concept, Nylon, Warp, and Squire.

Before venturing solo, Paty Cantu was a founding member of Mexico’s pop duo ‘Lu’ that toured around the globe. Considered a veteran now, she is making heads turn with her latest release mixing elements of Electro Pop, Hip Hop and a sprinkle of regional sounds from her hometown of Guadalajara.

SPAIN
Hailing from Barcelona, Rosalía is a songstress who started out with traditional flamenco style sounds and started turning heads after Billboard gave her the Rising Star Award two years ago. Now everyone who is anyone wants to work with her as she mixes her unique style with elements of Hip Hop, Trap, and Reggaeton. She recently teamed up with The Weeknd remaking his mega-hit “Blinding Lights” à la Spanglish style.

Ana Fernandez-Villaverde who goes by the stage name La Bien Querída has been a steady force in Madrid’s electronic scene with her esoteric live shows. A painter by trade, she decided to get into live performances with fellow Spanish Indie Rock band Los Planetas. Her new single “Un Gatito” is turning heads once again.

As the youngest of three, I have my older brothers to thank for my eclectic taste in music which ranges from The Beatles to AC/DC and everything in-between – throw in my early teen years in the 80s when I discovered music on my own, and you have to add Post Punk bands like Joy Division and New Wave music. I really just love all things music.

It all started out in Southern California at 16 with my first job at a record store called Licorice Pizza, which grew into radio work, then onto music branding companies such as Muzak and landing here at PlayNetwork in 2011. Working in this industry for so long, I can honestly say that the best thing I get out of all of this is being able to discover new music from all over the world that could be new to someone’s ears.

If I’m not trying to find that perfect song for one of our many brand partners or contracting with Slacker Radio as a music curator, you may catch me browsing through the bins at local record stores in Seattle, at my favorite dive bar with a glass of whisky in my hand or catching a live show. My favorite thing to do in my free time though, is just hanging out with my wife and teenage son either going to a Sounders game, out to dinner or just binge watching Netflix shows.